By Sushovan De - July 25, 2005
So, after a long time, I think it's a dear diary moment again. Not because something happened today - no it's the usual totally loaded day at kgp with project deadlines breathing down your neck the first week of the sems - no, it's just that I happened to sign into blogger today.
OK, so what have I been up to these days? Well, I got a new room (B-216). I feel as if I have lots of free space (like when you get a TeraByte hard-disk). It's quite comfy, given the southern window with the easy-draw curtain on it, and the super smooth celing fan.
Ya, ya, blah blah, but what have I been up to on the programming frontier? Well, mmm, I have two courses this semester that are absolutely related to programming, and guess what? The language that I was yearning to learn Assembly for the Intel Pentium 4, will be taught in our core course! That is so fundoo. We will be directly targetting the P4 and it is so cool. When I was looking at the assembly code generated by the gcc compiler, everything seemed to be in order and efficienty handled. Hats off to Robo for opening my eyes. TIMTOWTDI - never forget it! (In case you are wondering, TIM•TOW•TDI /'timto'di/ abbreviation. There is more than one way to do it.) OK, so gcc is not very obvious, but I am not sure whether it's way was not the more efficient of the two. But Robo's comments have now forced me to think deeper for every asm code.
And the other course? It's a jam-packed course about Fuzzy Logic, Neural Networks and Genetic Algorithms. There would be three term papers, one huge project, apart from the mid sems and end sems.
On the personal front, well, I got Avalon istalled and running. (By the way, let me just say that the name for Longhorn, Windows Vista, is just bad. Microsoft must have been in a common drunken state when the decision was made, this is not a name that I feel comfortable with. What is your OS, Sushovan? Vista. What? Vista. That's an OS? Yes. Oh. (under his breath) hasta-la-vista) Avalon is really cool with all the vector graphics and stuff. Looks pretty good. Seperation of code from presentation in such a complete manner is tremendously helpful and logical.
I have been trying to make my own paint, copying the functionality of MSPaint. Never have I realized that it was pretty advanced. Like, it is simple to take pictures and apply transformations to it, but giving tool for a WYSIWIG picture manipulation is difficult! Once I get through the basic stuff, I am planning to integrate anti-aliasing into the program, so that it will be one big step ahead of paint. Also, in case you did not know already, keeping the SHIFt key pressed while using the different tools gives you quite good stuff, including the eternal problem of drawing absolutely horizontal and vertical lines.
Another thing that I have been working on is a LAN chatting app based on FileSystemWatcher. It would be quite a useful app as and when I finish it. The FileSystemWatcher class is inherently very helpful and innovative applications can be thought of from it.
Another secret I want to leak out - I am not programming as much as I would like to - acads ka load hai bhai.
So, hasta-la-Vista™ till we meet again.

By Sushovan De - June 09, 2011
So Google has recently publicized the "+1" button for websites, which "competes" [1] with the Facebook [Like] button and the Twitter tweet button. This is a much more worrisome phenomenon than we give it credit for. Notice how the Facebook like button is instantly able to tell you which of your friends have liked that page? That is because Facebook is able to correlate your Facebook login with every page you visit. In order to see if any of your friends have liked that page, Facebook has to correlate the URL to your friend list. So even if you haven't clicked [Like], even if none of your friends have clicked [Like], just to be sure of that fact, Facebook will send the URL and your Facebook login to its servers, building up your entire browsing history. And now Google has done it. Twitter did it even before Facebook. I implore you, do not let these corporations track you everywhere you go. This will only end badly. Fortunately there is an easy fix. Add
Read more

By Sushovan De - May 29, 2007
Well... its kinda bittersweet when after 10 minutes composing a compelling post on a technical problem, you figure out the problem right before you hit submit. The tide turns on the bitter side when you spent most of your time formatting the post than composing the text. So... to precent wastage of "knowledge", I post my question, as well as the answer, in the hope that it will help somebody. I was tinkering with the CD-burning API in the Windows Vista SDK, and one of the basic classes needed for that is MsftDiscMaster2 . The MSDN example is in VBScript and does this to create an object of type MsftDiscMaster2 : WScript .CreateObject( "IMAPI2.MsftDiscRecorder2" ) Now, to port this to C-Sharp, the first thing that I tried was this: MsftDiscMaster2 g_DiscMaster = ( MsftDiscMaster2 ) Activator .CreateInstance( typeof ( MsftDiscMaster2 )); It showed me a runtime excption: Cannot create an instance of an interface. However, when I try this round-about way, it works!
Read more 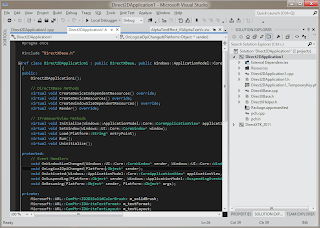